Turns out, going on a mad, fun-filled ride is only the beginning.

It was just another week when the ‘ridingitis‘ bug bit again with a vengeance. Since everyone’s schedules weren’t quite aligning, it was decided that this’d be a short breakfast run, down to Fountain Hotel on NH8 for some kheema pao. The point is to meet, eat, make merry and ride; or something like it. Where only six were expected, twice the number turned up. And in-between polishing off insane amounts of food, the plan changed, a bit.

Someone mentioned a lake, and knowing the suckers that we are for lounging by the waterside, the plan was on. The NH8 is a lovely stretch of endless tarmac that’s infested with all sorts of lane hogging slow-coaches. So when we got a relatively clear run, no one really needed another reason to open up the throttle. 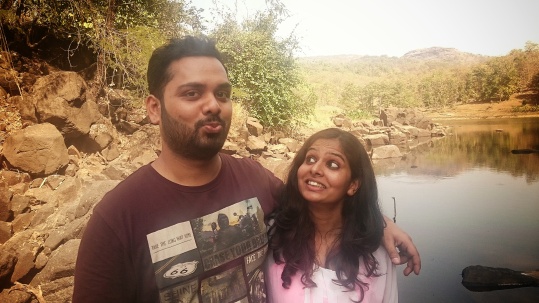 Long sweeping corners were attacked with enthusiasm, and this bunch is more or less beyond hara-kiri on two-wheels, so all was well. It truly was a special occasion for us. We had surprise appearances from pals as far as Gujarat only for this ride, with a pal’s missus gracing us with her presence. There was another pillion rider, along with a moto-couple riding two-up on a Continental GT, yes, they had ample space on the bike! So it was only natural for the excitement to be a bit higher than usual. Thankfully we didn’t end up having someone miss the turnoff like last time.

Phoenix – the missus’ RX135 was in a fabulous mood and hitting the 8000 rpm rev-limiter with merry abandon. The urge to go beyond was there, but the thought of blowing a hole through the piston and risking engine seizure kept me in check. Still, the way she blew past everyone as I tried to capture them on the camera was but one of the many grin-worthy moments that day.

Before we knew it, the turn-off had arrived and the road began its narrowing game from there on. Riding on those B-road twisties, the tarmac kept shrinking, eventually reaching a point where I could lie down the breadth of the road and block all traffic for the rest of the day. The lake was sighted, but the tarmac was so gorgeous that we kept going further. Unfortunately, by the time we decided to slow down, we’d overshot the point of return and we knew we had to find an alternate lounging spot. A quick chat with a helpful local had us crossing over down a path that was more stones & mud than anything else.

Much to the amusement of the school kids in the hamlet, we ended up riding along their walkways through their fields and over the shrubs before we came upon the rocks by the water. The afternoon was on and the bikes were parked in double quick time, as everyone decided to find their favourite spot.

The moto-devil had struck me though & I was off, across the rocky river-bed, over to the other side, into the shrubs. Gingerly treading my way over and around stones of varying sizes, I reached the river bed, only to realize just how deceptive appearances can be. What looked like a dried up area, with plants growing sporadically, turned out to be a marshy patch of sticky clay. But turning back wasn’t an option at that moment and I plunged on. The forces of adhesion eventually had their way & I was spinning the rear wheel in a sticky spot, not going anywhere. Thankfully, it was just the featherweight RX that I was riding and it was the ‘get-off, ride bike in first gear while walking alongside till you get out’ routine that saved the day. Still, I’d managed to lose my way and there was no other option left but to ride off into the jungle with the hope of both, bike & rider coming out the other side in one piece.

Luckily, I hadn’t strayed far and that five minute shortcut through the jungle got me out breathing free. Okay, so adventure over, it was time for my ‘on the rocks’ experience. Stretching out by the water, stealing those moments of peace amidst all the ruckus was really a blessing. The super-talented Meet had even managed to DIY a selfie-rig out of a sturdy piece of jungle-wood & copious amounts of duct-tape.

Hunger-pangs were starting to hit hard by then and with the sun shining brightly, we decided to push off. Off we went in search of the delicious culinary experiment that is the Vithal Special Vada at Vithal Kamath’s. The plates were under-attach from the moment they landed on the table in front of us. Then I felt a bit adventurous and ordered for some pao-bhaji. Big mistake! It was undercooked and full of powdered red chillies.

Given how most of us come from all directions, we decided to bid adieu from there itself and the journey back was reduced to two bikes & three of us. The fatigue of the week that’d gone by had finally caught up with us & we soon stopped for a cup of chai, rather than risking an incident ahead. With the city limits looming large in the horizon, the same questions returned. Why do we put up with the chaos and the stress of city life? Will there be an escape to a place where the pace is manageable and as long as our enhanced necessities are taken care of, we wouldn’t care for the luxuries of the world.

Riding into the parking lot back home, it was these very same questions that had embedded themselves into the mind. Monday was coming, this was a sign. And so the longing for another bout of ridingitis began… Until next time!

Till then, feast your eyes on the rest of the fun: