I’d been on the look-out for replacement crash-guards for my Royal Enfield Himalayan after damaging the ones I had in a tarmac scraper. My search led me to an unassuming corner in Dahisar East, through the doors of A4Moto Designs. 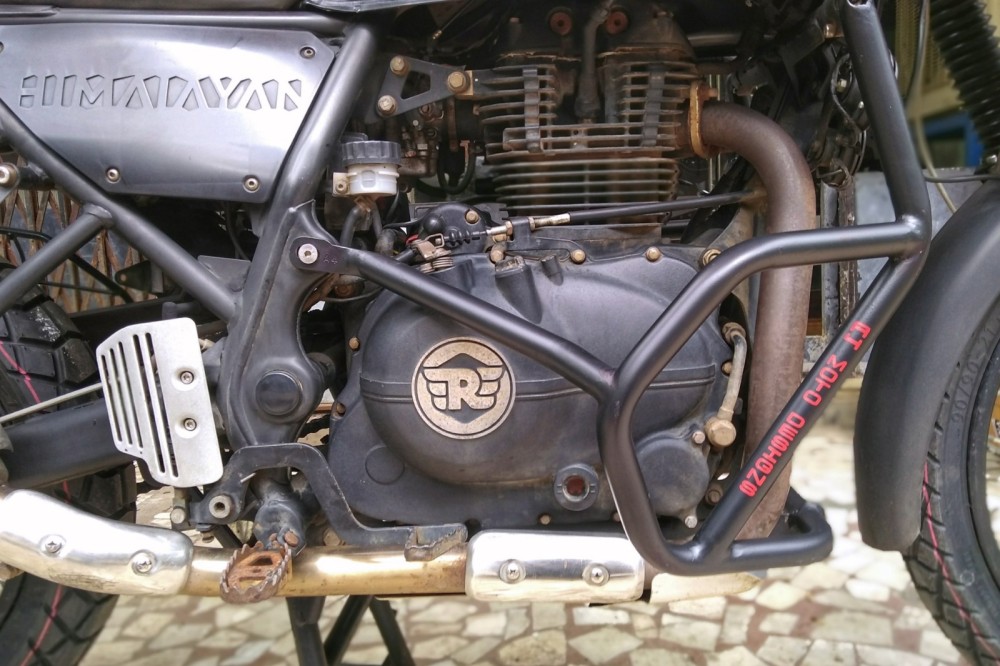 Akil Sayyed & Aditya Dombe are the brains behind A4Moto Designs. Both are well-known figures in the local motorcycling community. Popular for their custom motorcycles since years, they’re now busy developing their range of motorcycle protection and touring accessories.

Design Idea:
I had a cage-type guard in mind, that would prevent damage to the motorcycle in the event of a fall, while letting me muck around easily on trails without any hindrance. Luckily, A4Moto Designs too were working on a similar note and asked if I’d help test and refine their prototype. Details were thrashed around over chai and a few weeks later, returned to have the guards fitted on the bike for testing.

Usage Experience:
The installation of the guards came at a time when I had a few rides on the cards. From multi-day highway blasts down popular National & State Highways to Indore, Poona, Kolhapur, etc; to exploring trails near Lonavla, Virar & Igatpuri, the guards were on through them all. I also managed to thread my way through Mumbai’s gruelling traffic commute on multiple occasions, without incident.

I didn’t do any crash-testing as such (MotoGods willing, it shouldn’t happen), though the few times I touched down on trails, the bike came out unscathed. But I have liked plenty so far to continue using it for as long as the guards last.

Having ridden through varying terrain for a sufficient amount of kilometres, I found these guards to be designed sufficiently well and built to take a hit or two without damage to rider or motorcycle. Moreover, they’re also low-profile enough to go threading through traffic without worry of hitting fellow motorists or getting in the way of mud-plugging on narrow trails.

Future Improvements:
There were 2 aspects that I felt, can be improved upon. Not deal-breakers, mind you – and they are still hugely personal by nature, but, I’ve mentioned them, in the outside chance, that there are more of you who think similarly…

Pricing:
Akil & Aditya patiently listened in to all the feedback shared with them and have rolled out the final version that’s on sale now.

Priced at Rs. 3500/- (shipping extra) for the powder-coated version (Gloss Black or Matte Black), it comes with all mounting-hardware included. Other colours (viz. Gloss Red, Antique Silver, etc.) can be painted on, at additional cost.

What Else is available:
Their range of motorcycle protection & touring add-ons includes: Crash Guards, Engine Bash Plate, Tail Racks, Auxillary Lamp Mounts & Saddle-Frames. They have these for motorcycles including Royal Enfield’s Classic 350/Classic 500, Thunderbird/Thunderbird X, Bullet 350/500, beside the Himalayan. Apart from Enfields, they also have them, for the Honda CBR250R, Mahindra’s Mojo, and KTM’s Duke model range.

If you happen to own the above motorcycles and are on the lookout for quality stuff that’s priced fairly, then I’d suggest you reach out to A4Moto Designs (they’re on Instagram, or a Google search should point you in their direction).

Closing Thoughts:
In the 4000+ kilometres that I’ve clocked since having the A4Moto Designs’ guards on, I merrily tore down highways, stuck my leg out with ease on trails, dropped the bike in the brush and did the usual moto-madness things. The guards proved their worth sufficiently enough to repose my faith in them. Having them on the bike was akin to having a well sorted insurance policy – that has added a safety buffer, should things go South when riding.

The motorcycle protection/add-ons journey is never complete. What matters is getting the stuff that suits your needs. It is also important to support the local builders to come up with new & relevant stuff – for it helps the ecosystem as well. So here’s to celebrating Akil & Aditya’s efforts so far and wishing them well for all that they have lined up in the future.

Disclaimer:
I typically purchase the motorcycle products & accessories for testing. In this case, I received the guards mentioned above, in lieu of consultation for prototype mock-ups and improvements over the test period; as well as other refinements carried over to the final guards before public release. That said, A4Moto Designs have had no say whatsoever in my usage or in the views expressed.