Moto Musings: Continue living with the ol’ faithful – BS3 Himalayan, upgrade to the 2020, BS6 Edition, or switch to the ADV390 – dilemma indeed…

2015 turned out to be a motorcycling blow-out year for me. I’d been touring on my trusty ol’ RX135, happy as punch for as long as I could remember. Screaming down city streets and the highway, the RX had been the motoring mainstay, along with the Cast Iron Electra 350 that I had in the garage. Both bikes are special. One – was a featherweight smoker. I could thread my way past the thickest of city jams and scramble up trails, where others faltered. The other, came with this drunken elephant feel, but chugged like a locomotive. Then, I blew up the RX engine riding back from Goa and I was forced to rethink my plans.

I more-or-less knew what I wanted from my next ride. A go-everywhere cheerfully – nature, that worked just as well on tarmac, as it did when there was none. It had to have the ability to take on the worst of our ravaged-lunarscape roads while keeping the dodgy back from packing up altogether. Oh and all this in a sub, 2.5 Lakh range.

Keeping all this in mind, I evaluated went about evaluating the options. The Honda CBR250 was reliable to a fault, could take a beating that belied her street looks and could keep pace with the rest on the highway. But her riding posture wasn’t the best (for me) and she was, to be honest, boring as hell. The Mojo got launched & I was among the fortunate ones to spend a decent amount of saddle time in it. I loved the massive tank capacity, the performance of the engine and the way she settled into her line. The looks weren’t as much as a deal breaker, as her rear seat was – and that was that. Turning back to the Royal Enfield camp, I found the ContiGT535 and the Bullet 500. The former came with modern underpinnings, though she’d have to chuck her Café-Racer avatar, to become more, ‘livable’. The other, had the same familiar lines and the oomph that I so needed. A few choice mods and I could ‘live’ with it.

Digging deeper into the kind of riding I enjoyed  – not talking about abilities/skills, just a general direction.

I realized, I needed something rough-and-tumble ready, with long legs and lesser vibes. KTM had been speaking of getting the Adventure Duke but it was all talk and no show. Royal Enfield too had been speaking on their take on a purpose-built, go-everywhere motorcycle. One that had fed on their legacy but one that would keep the tooth fillings from coming loose after every ride.

Hours and days were spent poring over every bit of ‘news’ about the Himalayan and the Adventure Duke. The more I read, the more I battled in the heat and mind. Eventually, I knew, it was down to one of these two.

2016 came and I got lucky again, making it to the pre-launch event of the Himalayan, where she was introduced to the media, just before the Auto-Expo. A bit of a delay in reaching the launch venue meant that I had to trudge all the way up the hill, somewhere towards the end of the row. But what a blessing it turned out to be! You see, my earlier misfortune over arriving had put me in a pretty good position to get the whole view of the bikes going up and down the hill.

Spoke to the high-command and wrote out the cheque at the nearest showroom upon returning to base after the expo. The dealership experience was abysmal, having been made to run around for everything and more. Despite paying up the full amount, sans any auto-loan, the dealer really made things difficult and we were quite relieved to wheel the bike out of the showroom.

The high-command loved riding the bike as well, and none of us complained during pillion duties either. Thus began a love affair that has clocked nearly 35000 kilometres. 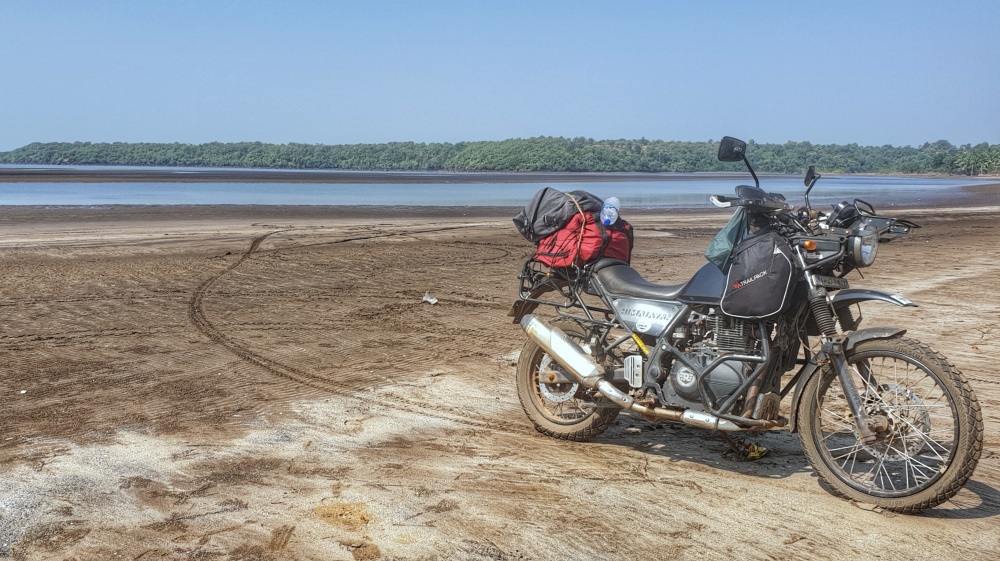 Tarmac-to-trails, beaches, city traffic, open highways and everything in between; hauling luggage and overweight humans – the Himalayan has delivered impeccably. Being a BS3, carbureted version, she had all the problems that plagued her kind. Parts were replaced at an alarming pace, but it was backed with stellar warranty support. We met some of the best, most fun people in these 35000 kilometres and we now have a moto-family not just across the country, but across quite a few countries around the world. During this time, Royal Enfield went on to launch the many variants of the BS4 Himalayan.

KTM finally came good on their promise and managed to launch the ADV-Duke 390 after making us all spout grey hairs, not just on our heads, but our beards as well! Spotting the latter at India Bike Week last year, I was happy seeing her at last. I even got to swing a leg over the saddle later in Bombay, thanks to a few good friends. Royal Enfield took their own sweet time, but they too woke up and launched the Himalayan (2020, BS6 version) with the quality and kit that it should have had, since day one.  And once again, the upgraditis bug has started to itch.

Should I spend all-over again on a better and capable motorcycle in 2020 avatar? If so, then what would it be – the BS6 Himalayan, or the ADV Duke 390?

Or should I put the money behind the faithful BS3 Himalayan, bringing her up to speed – and save the small fortune, to be used when the Himalayan gets a model update and the Adventure Duke 390 eco-system settles significantly.