The Urge to get back on the road begins within 2-4 days of returning from the previous one.

Maintaining the delicate balance between funding those rides and being a useful contributor to family & friends though sometimes stretches this wait for longer. Something similar had happened in the month past. Bidding adieu to the Bappa’ – there was just that one thought playing on loop in the mind.

Friday & Saturday merged into one intense work session as all efforts were on to get the Sunday clear. The day began in the dark, with the Rain Gods still playing merry. It was going to be only the four of us for this one, but I was simply happy to get back in the saddle.

Expectedly, BMC’s finest had left a flooded subway to welcome us and as the water rushed into the boots, the tone for the day was set.

Meanwhile, the rendezvous times had gotten jumbled up in the sleep-deprived communication chaos, that a few cuss words & calls could helped resolve. 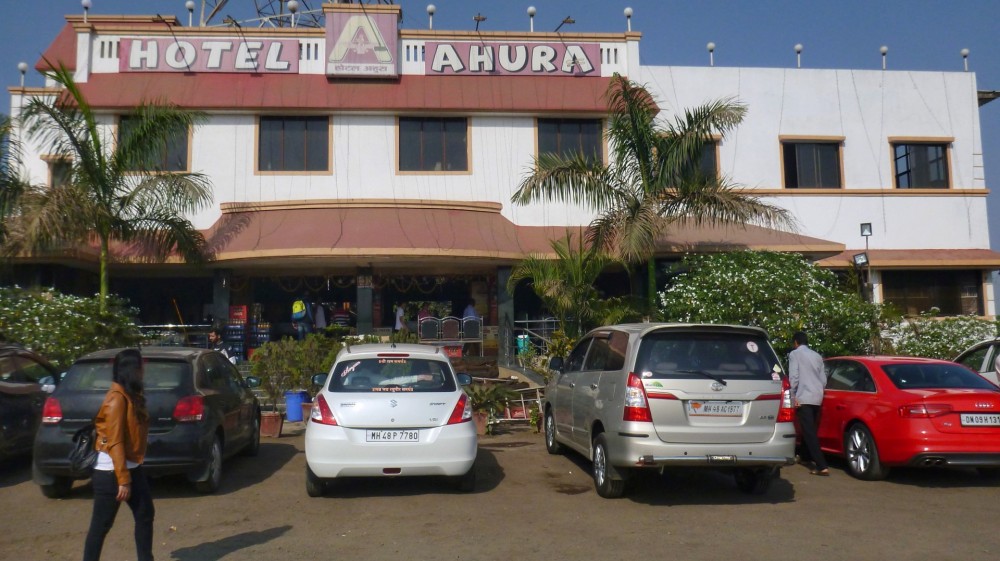 The destination was Ahura Hotel < Latitude: 20.017918 | Longitude: 72.9246> that’s some 97-odd kilometres beyond city limits. Known for its yummy food, bakery items and signature Parsi Masalas, the place is the default Plan B’ to the usual ‘Sunday Lonavla Rides’. The route was the usual NH8, so it was wide, expansive stretches of concrete and tarmac.

We quickly settled into our rhythm with the Enfield duo at the front, the Honda Unicorn in the middle, and me, bringing up the rear, on the RX135. The Yamaha, of-late, had begun to feel a little neglected. So the first few kilometres were spent praying that she’d throw up no tantrums, and that I could stretch her legs, so to speak. She seemed to revel in the cool breeze and there were no ‘surprises’ really.

Just pure, old 2T goodness, where even the tiniest of throttle inputs resulting in an instant adrenalin hit for the brain.

Khaniwade toll plaza < Latitude: 19.520465 | Longitude: 72.916919> came up uneventfully and we pulled into the ‘Kshanbhar Vishranti’ stall just after the toll booth, for a quick hit of ‘Chai’. As the quick, 5-minute stop stretched on with everyone shaking off their sleep deprivation, I couldn’t stop smiling at the bikes. It felt good, to ride!

Ahura beckoned and it was time to get back on the road. As the Thunderbird and the Himalayan pulled away, it was back to enjoying the 2-Stroke experience. A few moments later though, trouble! Uh-oh, the Unicorn spluttered & stopped. Damm! This can’t be possible, the mind screamed. The Honda Unicorn – the epitome of reliable, no-fuss, abuse-all-you-want-but-I-won’t-give-up motorcycling, had stalled.

Irony meanwhile, was having a jolly good laugh, as both the Royal Enfield motorcycles had disappeared into the distance.The usual, ‘Fuse-Spark-Fuel’ check led to the suspicion of water having seeped into the fuel tank. Opening up the drain-nut on the carburetor confirmed this, as the liquid that flowed out, could only be described as petrol flavoured water. The dense clouds were threatening to break into a rain-dance at any moment. So we packed up and fired the Unicorn up, unsteady idle, no revving capacity et-al.

So you had a spluttering and threatening to die at any moment Honda Unicorn out front, and an angry, overheating 2-Stroke snarling at being held up, bringing up the rear. The 30-odd kilometres that this arrangement continued was an exercise in agony, more because, my shins were being roasted from the 2T furnace.

As we caught up with the two Enfield’s just ahead of the Manor Telephone Exchange Phata, the Honda miraculously recovered. It’d survived on a diet of water and fuel and was now revving freely. Yippee! I was starting to get some serious hunger pangs and the RX too was threatening to overheat. So it was time to let ‘er rip! The toll-booth at Charoti < Latitude: 19.89052 | Longitude: 72.942596> has never come up quicker and it was a huge relief to see that Ahura Hotel board come up on the road.

The food is generally good at Ahura and the place is a hit among motorcyclists. Ordering here is like a ritual of sorts. The breakfast plan had turned to a brunch one too. So we ordered generous servings of Kheema Pao, Kheema par Eedu (Kheema with a fried egg on top), Chicken Cutlets, Omelette and cups of chai of-course. It was disappointing to see Styrofoam cups being used on this instance though.

I ditched the chai and decided to try out the Raspberry jelly instead. Served in cutting-chai glasses, it was heaven in every spoonful.

Ahura has a great bakery products section, with their Khari Biscuits, Milk Toast & Naan-Khatai being tried and tested choices. They also have some superb masalas on sale and offer them in combos too. Their turmeric, cumin powder pack was out of stock, so I picked up just their Dhanshak & Parsi masalas. Reasonably priced and packed conveniently, they’re definitely a must-bring-back home recommendation on every visit.

We’d have loved to see hammocks around, after all that heavy feasting, but the nearest beds were back in the city, so reluctantly, we took off for our return leg. The Unicorn had shaken off the splutters like a pro and had sped off at the tail of the Himalayan. So it was up to us sleepy-heads on the Thunderbird and the RX135 to bring up the rear. The roads were nice, the scenery lush green, therefore making the first leg of the return very alluring.

Was only reflecting about how beautiful the countryside really is during the monsoons, when we both spotted it and pulled over to the side immediately. The sight of the water gushing over the rocks meant only one thing – we had to get closer. So we took off down the slip road and stepped into a different world altogether. Gone was the din of the highway just 100 feet behind and the quaint village life was all around us. We decided to go as far as we could muster and soon came up to this ‘Wow’ view!

We’d found our zone! The next hour was spent in deep thought, resolving a few pending issues in the mind, conversing with nature, contemplating on the larger meaning of life and other such philosophical stuff.

We also managed to coordinate and get the distant duo to join us. So yay! We’d all missed our ‘Get Back Home’ time, again – but who cared…

Finally, after much reluctance, we did decide to head back onto the highway and wind our way home. Khaniwade Toll-Plaza did take ages to come, adding to my belief, that the return trip, always feels longer in comparison.

Having sufficiently cooled off the bearings, it was a non-stop run back to Dahisar. Thankfully, we managed to make it without much rain, unlike in the morning, nor did we face much traffic congestion either.

Good food, mad company and a jolly good ride – that my friends, is how a Sunday is spent.

My Travelogues under one roof!